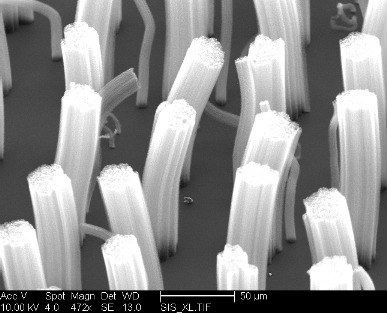 The SEM image below shows part of an array of 20 micron carbon nanotube turfs that are used as a thermal switch in a MEMS device. The vertically aligned turfs are grown on a sol-gel substrate which is patterned using the photolithography equipment in the cleanroom. The process allows for precise control of the position and size of the nanotube turf, creating arrays of turfs as small as 5 microns to be grown. 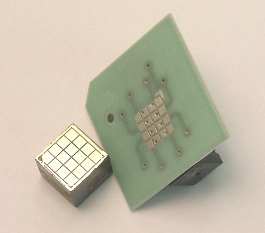 The cadmium zinc telluride cube (CdZnTe or CZT) in the bottom left of the picture was grown, cut and polished here at WSU and was patterned with the 4 x 4 array of pixels in the cleanroom.  The pattern was aligned to a circuit board (right) and mounted.  These CZT cubes are high-resolution single crystals that can detect high energy x-rays & gamma rays for medical imaging and homeland security applications.

Flexible electodes consisting of a thin gold film sputtered onto a polyimide are manufactured in the cleanroom.  A complex process of photolithography, plasma etching, spin-coating and DC sputtering make it possible to form the micron-sized electrode traces. The electrodes are implanted in rats for neurological studies. 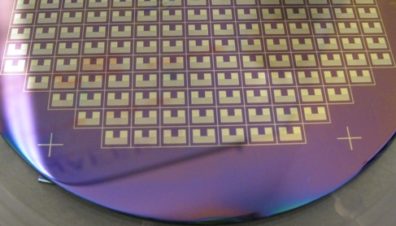 These platinum humidity sensors were fabricated in the cleanroom and have interdigitated electrodes that are separated by only a few microns.  The sensors were made for a local business that specializes in measuring water activity in food science, pharmaceuticals and agriculture.

David Bahr, Cecilia Richards and Robert Richards invented the world’s smallest engine.  Smaller than a dime and thinner than a piece of paper, the P3 engine is capable of someday replacing batteries in many portable electronics.  The engine is radically different in design, fabrication, and operation from any existing engine, the result a of a focused effort to entirely rethink the concept of an engine on the micro-scale. 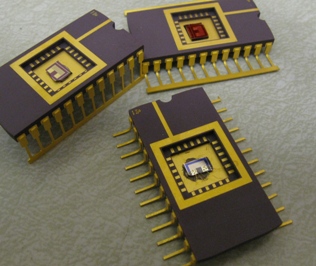 Using our MEMS packaging techniques, we can transform a sample on a wafer into a full-functioning device. 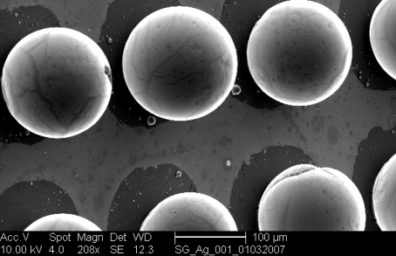 These 100 micron size gallium doplets are used for a MEMS switch. They are built ontop of a silicon wafer that is processed in the cleanroom. When the temperature of the gallium is slightly elevated from room temperature, it becomes a liquid and can be used as a very reliable switch. It is better behaved than a mechanical switch which can induce large current spikes when turning on. Another advantage is that these gallium droplets virtually have an infinite life with no mechanical wear.