Nationally renowned in the fields of materials science, physics, and positron and crystal growing research, Lynn was the Boeing Chair of Advanced Materials Science and a faculty member in both the School of Mechanical and Materials Engineering and the Department of Physics and Astronomy. He was a challenge solver par excellence. He had a wide variety of research interests, including muon, high energy, and atomic physics; antimatter for defect characterization with mono-energetic beams; electronics development; hearing aids; radiation detectors; high-power laser materials; piezoelectric materials; computer modeling and theory development; and materials, including metals and alloys, silicon, silicon carbide, CdTe, ZnO, PMN-PT piezoelectrics, diamond, solar cells, and gemstone-quality synthetic rubies.

Lynn was an international leader in crystal growth, developing methods to produce high-quality crystals used in industry, academia, and federal agencies. Manmade crystals inspired by Lynn’s innovative research power an astonishing range of devices from the sensors that control electronic functions in cars to the semiconductors driving computers and smartphones or impact powered homing beacons for golf balls. In recent years, he and his colleagues made a key advance in cadmium telluride solar cell technology, overcoming a practical voltage limit that had been pursued for six decades.

After receiving his Ph.D. from the University of Utah, Lynn worked at Brookhaven National Laboratory in New York, where he conducted pioneering research in antimatter and constructed early prototype positron beams, including one of the most intense beams at the time. 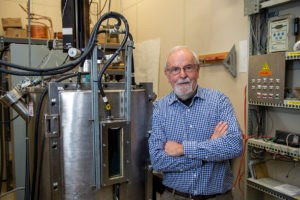 Lynn came to WSU in 1996 and became director of WSU’s Center for Materials Research (recently renamed as the Institute of Materials Research). In 2000, he received a $1.1 million grant from the W.M. Keck Foundation to build an antimatter physics research laboratory and to install an accelerator, using positron beams to understand properties of materials. He later developed a prototype positron trap, which, he hoped, could someday power space travel. In 2017, he received the WSU Eminent Faculty Award, the highest award for faculty members.

That same year, Lynn was featured in Washington State Magazine (“Paths that grew crystal clear”) and recalled how his high school chemistry teacher “encouraged me and let me work in the chemistry lab after hours. During that time, I realized there were problems in science no one had the answers to—things you could do that no one else could.”  That exciting insight lit up his whole life. Lynn came to see science as a world of interesting puzzles to be solved and discovered a passion that endured throughout his life. Lynn continued to pay it forward throughout his career by actively mentoring students, including more than 40 graduate students, many of whom have gone on to positions in academia, national laboratories, and industry.

Over the course his scientific career, Lynn received more than $30 million in research support and published more than 450 articles. His work has been cited more than 13,000 times, and he held more than a dozen patents. He was a fellow of the American Association for the Advancement of Science and the American Physical Society, as well as an elected member of the Washington State Academy of Sciences.

As his family fondly recalled, “Kelvin freely shared his ideas and insights with anybody willing to listen: friend, student, co-worker, or competitor. His successes were fueled by a never-ending curiosity, inability to be deterred by being proven wrong, the willingness to reapply old papers and zero hesitation to learn from failures.”

“Kelvin was a brilliant researcher who will long be remembered for his innovative work, his wise counsel, and his positive impact on the WSU community,” – Brian Saam, chair of the College of Arts and Sciences’ Department of Physics and Astronomy.

“Kelvin was a beloved member of the Washington State University community for more than 20 years. He touched so many across the entire university. His welcoming smile and kind spirit will be sorely missed.” – Mary Rezac, dean of the Voiland College of Engineering and Architecture